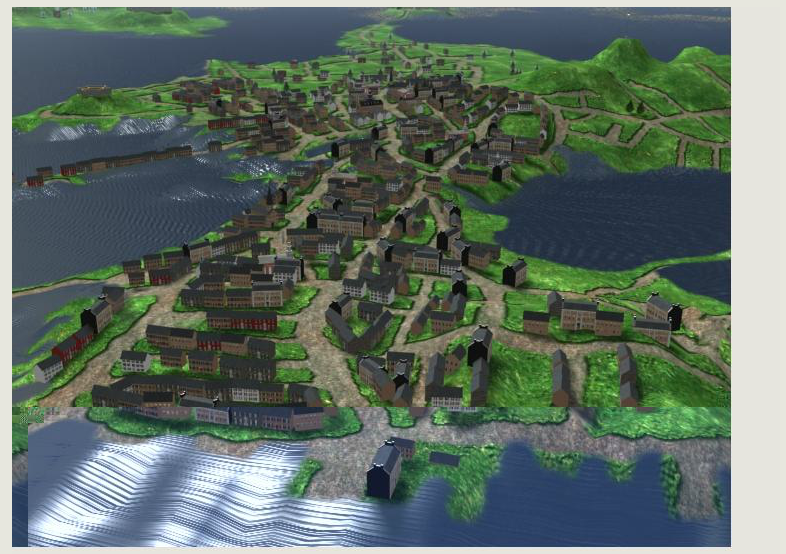 The North End is Boston’s oldest neighborhood and its streets are laden with the treasures of time. Not much is known about the native Americans or anyone living here until the Puritans arrived in the 1600’s. As the colonists settled in, streets began to branch throughout the North End.

Much has been written about the North End’s famous history and the neighborhood is filled with plaques depicting historic locations. In this article, we highlight some of the lesser known street stories in the North End and make our own plaque proposals. You won’t find anything about the Freedom Trail sites, Paul Revere, the molasses flood or the Brink’s robbery on this list. But, we think you will find them just as interesting!

The corner where Charter meets Salem Street (map) is Phip’s Corner where a 17th century mansion stood consuming half of Charter Street.

Sir William Phip was a North End resident and the first governor to rule under the new Massachusetts charter — a 1708 charter that unified Maine, Plymouth and Massachusetts into Massachusetts Bay Colony. The North End is tied to the governor whose legacy began when he recovered sunken treasure from a Spanish galleon near the Bahamas. His mansion had a spacious courtyard with cascading gardens that toppled the property line as far back as to Hull Street.

We propose a plaque recognizing the corner of Salem and Charter Streets as the former location of Phip’s Mansion.

The Shawmut Peninsula, according to historic Boston maps, show a time of the past when the city was nothing more than a spidery “island.” The North End, in particular, was distinct from the rest of the main land; high tides often nearly isolated the neighborhood from the rest of Boston (Boston: History of the Landfills).

History requires the calling upon of visuals — and for a neighborhood that has worn many masks, its waterline has surely receded from the streets and memories alike. Adding landfill means that many of the man-made streets of Boston were once waterways. On the southern side of the North End, the shore line once came up to the line around North Square – the first square in America. On the other side of Hanover Street, the water line hugged the northern most side of the neighborhood up to North Margin Street.

It would be nice to preserve a watermark line with a plaque that describes a visionary account of the 17th century urban seascape.

“What more can these immigrants from Italy expect? It is not every prisoner who has a President of Harvard University throw the switch for him.”- Heywood Broun, N.Y. World.

The plaque fading into the facade of 256 Hanover Street is in need of renewal in order to draw attention to “Remember: Justice Crucified, August 22, 1927.“

Sacco and Vanzetti Defense Committee In May 1920, two Italian immigrants were arrested for the murder of two payroll guards in South Braintree. A group of friends and fellow anarchists organized a defense committee for the accused men, Nicola Sacco and Bartolomeo Vanzetti. For the next seven years the committee struggled to free the two, whose cause became a passionate controversy the world over. In 1925, the committee moved to upstairs rooms at 256 Hanover Street, where the drama intensified. Sacco and Vanzetti were executed in 1927, but theirs is “the case that will not die.”

This story deserves more recognition than the one that is faded on the facade of Hanover street. We propose an expanded commemoration or memorial at this location (map). 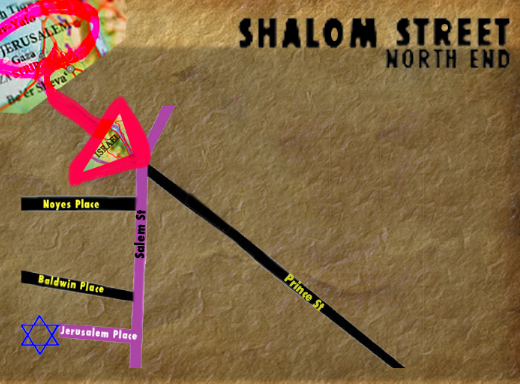 Jewish immigrants built a lot of the North End. They financed most of the construction between 1865 and 1895, and there used to be three synagogues just in this neighborhood. Nineteenth-century North End was predominantly Irish but increasingly laden with Jewish and Italian immigrants that began arriving around 1870.

Jewish Drive takes the length of Salem Street and a side street, Jerusalem Place. Salem Street at one point even had the nickname “Shalom” Street. In 1903, there was a synagogue, Shaarei Jerusalem, on Carroll Place, where upon the street became Jerusalem Place. These streets were once predominantly occupied by Jewish families. Most clothing stores were run by Jewish families because they were once the predominant business population of the neighborhood. Jewish inscriptions along several weathered tenement buildings survive like indelible ink to remind the neighborhood of its Jewish history. Even further back, history dates Chamber St, part of the Old West End, pre-Urban Renewal, as having once having a Jewish Burying ground– just blocks from the North End.

We propose a plaque on Jerusalem Place to recognize the synagogue and Jewish contributions to the North End.

The North End has connections to the origins of Boston College.

In October 1847, Father McElroy was sent to Boston, Massachusetts by the Bishop of Boston, John Bernard Fitzpatrick, to serve as pastor of St. Mary’s parish in the North End. Bishop Fitzpatrick set McElroy to work on bringing a college to Boston.

Throughout the 20th century, St. Mary’s Church was located behind the current Casa Maria House (what is now Lynn Street). St. Mary’s was not only the first parochial school for boys, it was also the First Parish Church in Boston. It served the community of Boston as a place of religious and educational services until it was demolished in 1977. St. Mary’s held the first parochial school that eventually influenced the formation of Boston College and Boston College High School.

We propose a plaque to recognize the work of Father McElroy and his ties to the North End and Boston College. 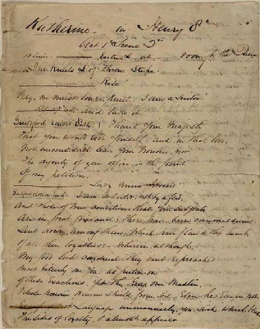 A primary school on Parmenter Street (at the time when it was the North side of Richmond Street), the “Cushman School,” was named in honor of the birthplace of the celebrated actress, Charlotte Cushman. When it opened early in 1872 it was the first school ever named after a woman in Boston. Today, the site location of the demolished nineteenth century Cushman School operates as the North End Branch of the Boston Public Library as well as a gated community of luxury condominiums. Behind mostly closed walls are plaques that chapter the Parmenter Street history. The plaques need to be made public on the Parmenter street-facing facade of the library. Boston City Archives also document this location that was once an open park and the first official community playground in America.

7. Second Site for Sacco and Vanzetti – The Funeral

“What stands out in my mind when Sacco and Vanzetti were electrocuted was that they had undertakers, the Langone Family, located on Hanover Street…There were no automobiles in those days – just horse and wagon teams, but they had automobiles as funeral cars for them – I have no idea where they came from.” (Phil D’ellasandro, Boston’s North End by Anthony V. Riccio)

Capodilupo, Italian for ‘Head of the Wolf’ is a legend derived from the old country that is something of a Robin Hood of Italy. The Capodilupo limousines were housed in the second floor garages at the corner building of Thacher and Endicott Streets. Their limousines serviced the Sacco and Vanzetti funeral, a procession that stretched from Hanover to Tremont Streets. The building across the garage was the Capodilupo residence– a place where public figures like Frank Sinatra and JFK were no strangers to as they were friendly with several members of the family. Additionally, in the basement of their house across the street, at 158 Endicott, was a speakeasy during Boston’s Prohibition. Capodilupo power surged through the streets for over a century.

We propose a plaque to be installed at 158 Endicott Street to recognize the funeral of Sacco and Vanzetti.

The Pilgrims had their rock, the Puritans had their picnics. We propose a plaque at 585 Commercial Street, the new location of a North End school (map).

The Puritans that landed near this site were known to have ‘Puritan Picnics,’ on what is now “Copp’s Hill,” Boston’s second oldest burying-ground. The same land that was originally used for Puritan leisure and recreation is also the site of the first erected windmill in the nation. North End had a chocolate mill, among others, located in nearby locations as well. The spot also may have been near where the legendary Ann Pollitt, a 17th century teenager, was the first Puritan to step foot in Boston.

We propose a Puritan Landing plaque at 585 Commercial Street.

The Palazzo Ducale was not only once the center of “La Serenissima,” Venice’s nickname for being ‘the most serene place,’ but according to scholars like John Ruskin, it was the center of the world. For nearly four-hundred years it ruled the as the Empire of the Mediterranean Sea. 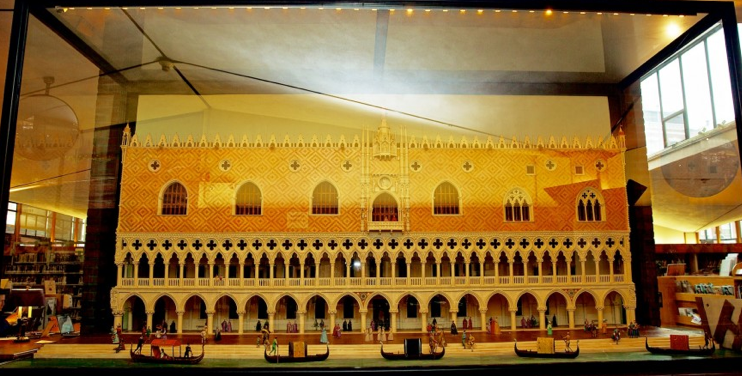 There needs to be a 180 degree rotation of the Ducale Palace diorama that is displayed in the North End Branch of the Boston Public Library. It currently hides behind center column of the library and faces out towards the back wall, seen by the lucky few that already know it is there. This scale-size diorama was originally headed for the Museum of Modern Art in New York City but was re-routed back to its permanent home on display in the North End. The diorama underwent a recent restoration and should be front and focus of the library. A 180 degree rotation is needed so that the facade of the showcase faces out to the street allowing visitors and residents to visit Venice in the North End.

We also propose a plaque outside the library highlighting this hidden treasure.

For a neighborhood that was once bustling with a dozen bakeries, these streets are past the peak of Italian bread baking. Over the years, rises in rent have driven many of the Italian families out of the area, forcing century-old family-owned businesses to close their doors. When Boschetto’s Bakery turned off their ovens in the summer of 2013, long time residents had a hard time accepting the void.

We propose a plaque to Bakeries Bygone at 158 Salem Street.

Thank you for reading our 10 Hidden North End Historical Sites and Plaque Proposals. If you have a hidden site that we should blog about, email info@northendboston.com with your story!

Jacqueline lives in the North End and loves the stories that one can only find here!

View all of Jacqueline Gray's posts.